MICHAELA STRACHAN is one of UK TV’s best loved and most well-known wildlife presenters. She has been presenting since 1986 on a variety of programmes from The Wide Awake Club to The Hitman And Her, The Really Wild Show to Michaela’s Wild Challenge, Elephant Diaries to Countryfile to Springwatch and many, many more. She started off presenting children’s programmes but these days is known as a wildlife presenter and has travelled all over the world filming animals and conservation projects. 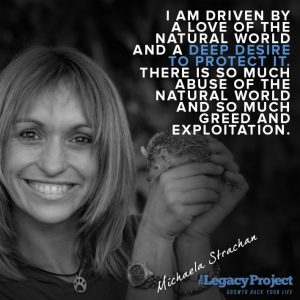 My Definition Of Success | Success as a TV presenter, who is known for wildlife programmes, comes with a lot of responsibility. People trust what I say, so I have to make sure that I never make a false statement. Everything has to be factual. I have a voice and I can use it to make a difference. My opinion is respected which can be quite daunting at times! The best part of my success is that it has enabled me to inspire people about the natural world and that is a tremendous privilege. Many people presume I’m an expert but I have always just been a wildlife enthusiast, I am constantly learning about the natural world. I have been presenting for 30 years and started as a children’s presenter on a Saturday morning magazine show called ‘The Wide Awake Club’ for ITV in the UK, in those days being famous was a laugh and quite frivolous. Now I’m older I take my success more seriously and try and use my voice wisely to inspire and make change. The environment is not in good shape and needs all the allies it can get! The tough side of being well known is that everyone has an opinion about you and these days there are so many platforms people can use to let you know that opinion!! On the whole though it has been an amazing experience.

I Am Driven By | A love of the natural world and a deep desire to protect it. There is so much abuse of the natural world and so much greed and exploitation. It’s an absurd world when we poach rhinos to the edge of extinction so we can put their horn into medicines and aphrodisiacs, we breed lions in captivity so rich people can pay to shoot them and put their heads on their walls, elephants are shot so we can use their tusks for chop sticks, we kill 100 million sharks a year so we can put their fins into soup! Putting an end to these absurdities like these is what drives me.

My Highlights | The programmes that I am most proud of are the ones that have highlighted an important issue. I did a children’s series for the BBC called ‘The Really Wild Show’ for 15 years. Towards the end I became known as the presenter who reported on animal issues and that is what I’m passionate about. We reported on the state of the South China Sea and featured shark finning and dynamiting the coral reefs. We also did a special on the cruelty of animals performing in circuses. The most shocking special we did was on the bear bile industry in China, where sun bears are farmed for their bile which is put into traditional Chinese medicine. Basically they’re kept in cages where they can’t even turn around, a catheter tube is inserted into their gall bladder and bile is extracted. It’s one of the most cruel things I’ve ever witnessed. We did a special on the bush meat trade too. I think it is so important to make people aware of what is going on in the world, only with education will things ever change and the media is such a strong tool to promote education and change.

The Difference Between good And Great | Patience, perseverance, passion and perfection! So many people do things that are good enough instead of being really good. Cross the T’s, dot the I’s. It’s all in the detail. Be proud of the end result. I think it’s really important to do a few things really well than do a lot of things averagely!

Critical Skills I Developed | I am passionate about what I do. I am a good communicator and enthusiastic about things that I believe in. I have grown up with a strong work ethic. I have always tried to be myself. I have always been reliable. I enjoy being part of a team. I always try to be on time. I respect other people who are passionate and do their jobs to the best of their ability. I am a very positive, cheerful person.  I had a lot of part time jobs when I was at school and at college and all of them have been character building and given me a respect for money from a young age. From being an Avon lady, to a singing telegram girl, to working in a pub, to dancing in a hotel at Heathrow airport, to working in a kennels. None of them were particularly glamorous, but I learned from all of them. I have always tried to keep my success in perspective and not let my ego get too big! 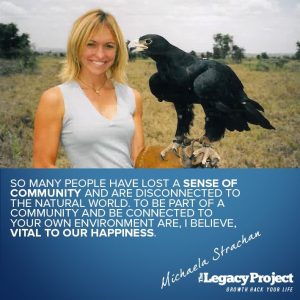 Principles I Live By | Follow your dreams. I wanted to be a dancer when I was little and did in fact succeed for a while before I became a presenter. My mum totally supported me. I think it’s important to realise where you’re talents lie though. It’s important to know what you’re good at and what is just a complete fantasy! Respect is so important in life especially respect for our natural world. Empathy, understanding of other people’s situations. I try not to be too judgemental. Don’t confuse having a career with having a life. Unless your ambition is to be the next Nelson Mandela and sacrifice everything for something you believe in, most of us need a balance in our lives, especially when we have families. Achieving a balance has become important to me, what I call neutral bouyancy between work and home life. When I was younger I was very ambitious, I loved my work and a day off would seem like a waste. I got to a point where I was near to burn out. Now I have a family, my priorities have changed and I constantly strive to achieve the perfect balance.

Resources I Use To Stay Inspired | I find many quotes inspiring and so relevant. These are a few of my favourites:
“Tell me and I forget, teach me and I may remember, involve me and I learn.” ― Benjamin Franklin
“When the Last Tree Is Cut Down, the Last Fish Eaten, and the Last Stream Poisoned, You Will Realize That You Cannot Eat Money” – Native American saying
The Paradox Of Our Time (this one I find really poignant) –authorship unknown, from Sacred Economics”
“We have bigger houses but smaller families;
more conveniences, but less time;
We have more degrees, but less sense;
more knowledge, but less judgment;
more experts, but more problems;
more medicines, but less healthiness;
We’ve been all the way to the moon and back,
but have trouble crossing the street to meet
the new neighbor.
We’ve built more computers to hold more
information to produce more copies than ever,
but have less communications;
We have become long on quantity,
but short on quality.
These times are times of fast foods;
but slow digestion;
Tall man but short character;
Steep profits but shallow relationships.
It is time when there is much in the window,
but nothing in the room.
I think of our species as an absurd species. We have lost so much of what should be important to us. Social media has many benefits, but sometimes it connects us to people who are far away and disconnects us to the people sitting next to us. So many people have lost a sense of community and are disconnected to the natural world. To be part of a community and be connected to your own environment are, I believe, vital to our happiness. 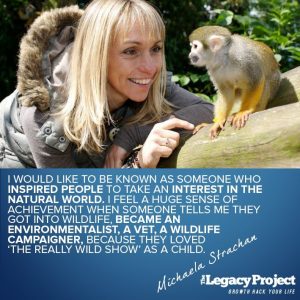 Advice On Building Wealth | I would say to anyone who is looking for wealth, read the following!
“When the Last Tree Is Cut Down, the Last Fish Eaten, and the Last Stream Poisoned, You Will Realize That You Cannot Eat Money” – Native American saying
Life should not be about achieving wealth and riches. I see success as something much deeper than financial wealth.

The Legacy I Would Like To Leave | I would like to be known as someone who inspired people to take an interest in the natural world. I feel a huge sense of achievement when someone tells me they got into wildlife, became an environmentalist, a vet, a wildlife campaigner, because they loved ‘The Really Wild Show’ as a child. I feel huge pride when someone tells me they built a pond in their garden to help wildlife or put up a bird box or signed a petition against badger culling in the UK because they were inspired by Springwatch. 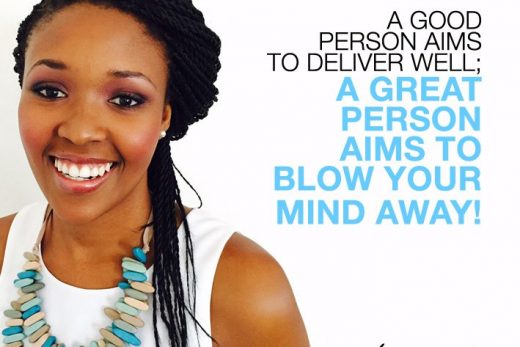 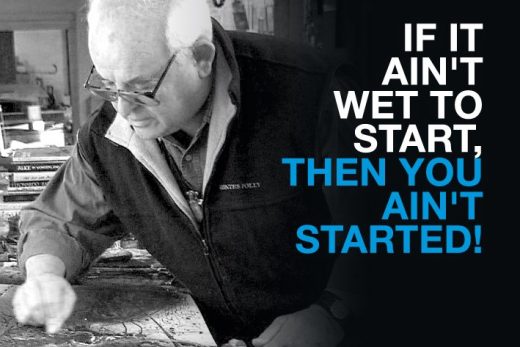 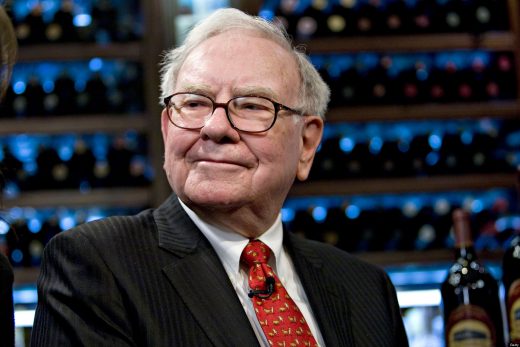 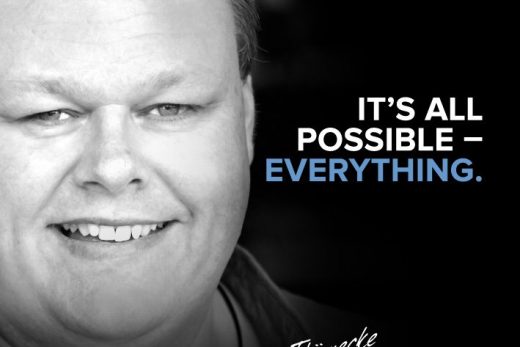